Sinn Fein shake up Irish politics at the ballot box

After the Irish general election at the weekend, it seems as if the long-standing two-party system has finally been smashed apart.

Unlike the UK, where a first past the post system operates, Ireland employs proportional representation to form their government, which has meant that historically the outcome has involved some form of coalition administration.

Fine Gael have been in power since 2011, initially in coalition with the Labour Party, then with independents, with a confidence and supply arrangement with Fianna Fail. In fact historically it has been essentially a two-party system with Fianna Fail and Fine Gael hustling with other smaller parties to form a coalition, refusing at any point to collaborate with each other.

However, as the votes came in over the weekend, it appears that the political landscape has been well and truly shaken up with Sinn Fein winning 24.5 percent of the first preference votes, compared to 22.2 percent for Fianna Fail and 20.9 percent for Fine Gael.

As per normal, it appears that no single party can form a majority, but Sinn Fein’s success was described by its president Mary Lou McDonald as a, “revolution at the ballot box”.

Both the current PM Leo Varadkar, and Fianna Fail leader, Michael Martin, say they will not form an alliance with Sinn Fein or each other, so the future is looking extremely confused.

80 seats are required for a majority in the Irish parliament, but given that Sinn Fein only had 42 candidates across the land, although they have won the first preference votes, it is impossible for them to form an administration on their own.

To avoid another general election, the parties are going to have to come to some serious compromises.

Ms McDonald explains the shift to her party as a protest about the status quo. She explained,"The frustration people have felt for a long time with the two-party system, whereby Fine Gael and Fianna Fáil handed the baton of power between each other - that's now over.”

Of course the essential impact of this change will be on the Irish people, but both the EU and the UK will have a keen eye on events.

The question of the Irish border has dogged negotiations between Boris Johnson and Brussels from the outset, and now that he is trying to thrash out a trade deal with the EU, he really needs Dublin to be on his side.

Having established what seems to be a good relationship with Varadkar, Johnson will be concerned about the power of Sinn Fein with whom he has not had such healthy relationships in the past in Stormont. After all the Tories were buoyed up by the DUP under Theresa May and Sinn Fein MPs in the North still refuse to sit in Westminster.

The final Irish election result could rock Downing Street as well as Ireland. 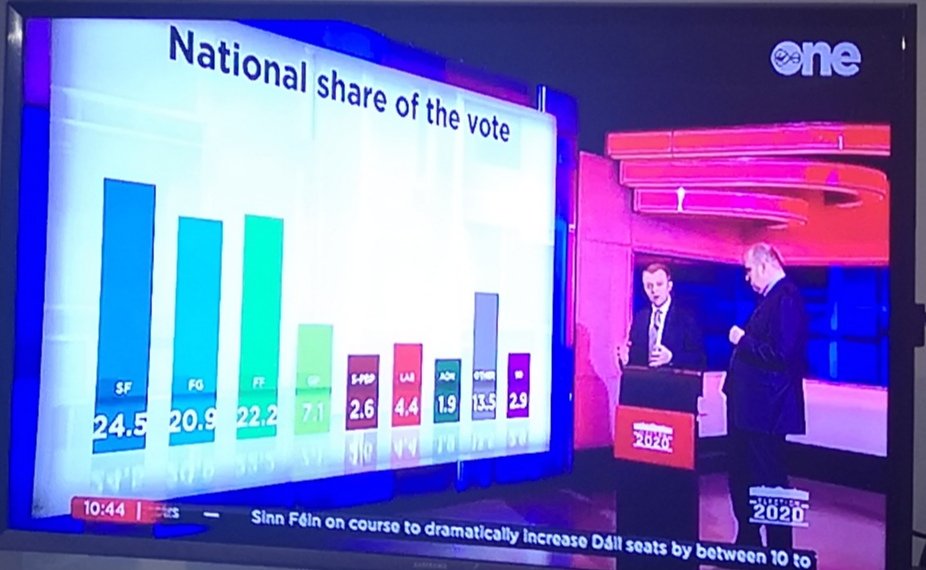 Over the past four years of the Brexit conundrum, the border between Northern Ireland and the Republic has been a dominant feature and now, although the Withdrawal Bill has been rubber-stamped,…

Forty years ago Simone Veil, a survivor of the Holocaust was appointed as the first president of the European Union, and yesterday, Ursula Von der Leyen became the second woman to…

Next week, the European Parliament are due to vote on who will become the next European Commission chief and it is looking likely that Ursula von der Leyen is the most likely to win…

While the UK is engaged in parliamentary warfare over Brexit and the Tory Party are busy selecting their new leader, and the country’s PM, a European Summit is taking place to…

Polling booths are open across the UK today, as a country fraught with the Brexit debate and the ensuing chaos, chooses their representatives in the European parliament. Of course,…

Few will remember about the results of the European elections in years gone by, even though the UK has been a member for over forty years, but this time the landscape is altogether…

Today European Leaders meet in of all places in Transylvania, with one clear exception - Theresa May. 27 national leaders will join to assess the Union’s position post Brexit…

Over the past months the Brexit debate has highlighted the schism between the UK and Europe, however, all is not well within the EU itself, with relations between France and Italy…

The hyperbole is increasing as the last 49 days are ticked off the Brexit calendar. With Theresa May’s visit to Brussels today, on the back of Donald Tusk’s inflammatory…

As parliament embarks on five days of debate about The Withdrawal Agreement and the country holds its breath for its denouement next Tuesday, it will be rather challenging for…

Here in the UK we have been used to headlines which explain that the government has been preparing for the eventuality of a No Deal Brexit, but this week, in advance of the EU’s…

Back on the Trump rollercoaster, the man who has been slapping tariffs on Canada and China, seems to be on the verge of a zero tariff deal with the EU. The immediate question arising…

''The fragility of the EU is increasing,'' warns EU Commission chief Jean-Claude Juncker
By Suzi Cairns

Currently the proliferation of headlines pertaining to Brexit are on the increase, if that were possible, as Theresa May marches ever closer towards her final negotiations with Brussels…

As Theresa May enjoys the sun on her back after pushing The Withdrawal Bill through parliament, before she launches into the next - and possibly most significant - rounds of talks…

For some time the bookies have suggested that Italy would be the next country to leave the European Union after the UK, and the current political crisis in the country appears to support…