You are using an outdated browser. Please upgrade your browser to improve your experience.
This website uses cookies
Cookies help us and our partners provide statistics. By browsing this website, you consent to the use of cookies in accordance with our Cookies Policy.
Accept & Close
Home Articles
Pm Defies Trump With Huawei 5g Deal And Threatens Us Trade Agreement
13:39
UK

As the EU signs off The Withdrawal Agreement in Brussel today and Boris Johnson looks to America for an exciting new trade deal, the PM has rankled those in the US administration by making concessions to Huawei playing a role in the UK’s 5G network.

Trump has ben warning the prime minister for some time, that a ‘special relationship’ with the US would be inconceivable, especially on an intelligence sharing front, should the Beijing firm be involved in the UK’s digital infrastructure.

Today Secretary of State, Mike Pompeo is flying in to London, to thrash out the current status quo.

It is the American’s belief that the Chinese firm’s equipment offers the potential, and opportunity, to spy on another country. The suggestion being that cyber attacks would be enabled on a huge scale by controlling the essential telecom networks.

The PM’s strategy to avoid this possibility was to ban Huawei from sensitive areas like, military bases, nuclear sites or government buildings.

Johnson’s defence is that Huawei is being used on the periphery of the telecoms infrastructure and comes at an affordable cost. Trump however, is not impressed and is said to be ‘disappointed with the UK’s decision.

Of course these days Trump may not be in a position to go to war with China, but he is hellbent on taming their economic reach by stating a trade war with the continent.

Trade on Chinese goods are already hitting the American economy, although designed to do the complete opposite and Johnson can expect a similar reaction in his upcoming trade negotiations.

Pompeo’s visit today is seen as an opportunity to flesh out the beginnings of a trade deal now that Brexit has been signed o but the deal with Huawei is likely tolled to some belligerence from cross the pond.

Two Republican Senators, Tom Cotton and Lindsay Graham  aired their disapproval vociferously, with the latter explaining, "This decision has the potential to jeopardise US-UK intelligence sharing agreements and could greatly complicate a US-UK free trade agreement.”

Although this is not the sort of publicity that the newly triumphant Johnson would want to hear, given these men are close allies of the president, it is hardly surprising.

However on a historic day when Brussels severs the 47 year old ties with Europe it was ironic that Cotton declared that, "I fear London has freed itself from Brussels only to cede sovereignty to Beijing.”

Currently it will be interesting to see if a buoyant Boris Johnson, on the back of his election triumph will be more willing to take on a president, who is going through an impeachment process in his election year. 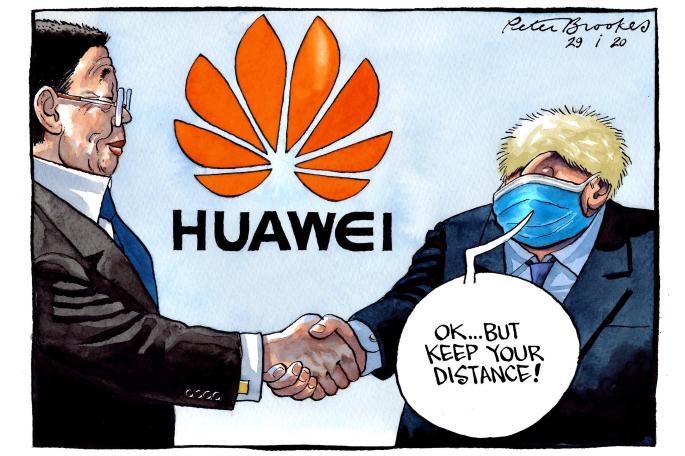