The leader of the ever-powerful Unite Union appeared on The Andrew Marr Show to explain his endorsement of Rebecca Long-Bailey as leader of the Labour Party.

Saturday saw a hustings event by all the candidates, after which Unite’s choice was rubber-stamped.

There was no surprise that Long-Bailey emerged as their preference, given that McCluskey was firmly in Jeremy Corbyn’s camp, and many see her as his natural successor.

Unlike other wings of the party who saw Corbyn as the reason for Labour’s landslide defeat in the general election, Unite is clearly hanging onto the radical agenda that he proposed and are hoping that Long-Bailey will carry it forward.

Of course, the selection of the Labour leader is a complicated affair which calls on the constituency Labour parties, MPs and MEPs, as well as the Unions to provide an outcome. However, there is little doubt that with McCluskey at her back Long-Bailey puts herself right at the head of the race.

In fact, in the minefield of campaigning, it seems that she broke the rules by communicating directly with her CLP using Labour Party data, which in any other circumstances would lead to her withdrawal from the race, but such is her support that in effect the rulebook was re-written and she was re-instated quick smart.

Despite warnings across the board that the Labour Party has never been, and would never be, successful with a Corbyn agenda, it seems that the powers that be, particularly among the unions, disagree.

The bookies, and the pollsters, however do not concur with this outcome and are still favouring Keir Starmer.

Unfortunately due to a family tragedy, Starmer had to pull out of the Hustings on Saturday, although he will be returning to the campaign trail on Monday and for many he is the man who can capture the heart of the Labour Party and therefore make it electable once more.

The drive for a female leader has however, also cast a long shadow over the campaign, and there are even some who are suggesting that, in the name of feminism, that Starmer should step aside and leave only women candidates in the race.

Unlike Emily Thornberry, who has gone toe-to-toe with Johnson at the despatch box with some success, there is some concern that McCluskey’s candidate may not be so well equipped, and with huge majority of 80 at his back the PM may well have a very smooth road ahead if Long-Bailey is unable to trip him up in The Commons.

This could well be another turning point in Labour’s history, where the Unions once again take real control of The Labour Party’s agenda. 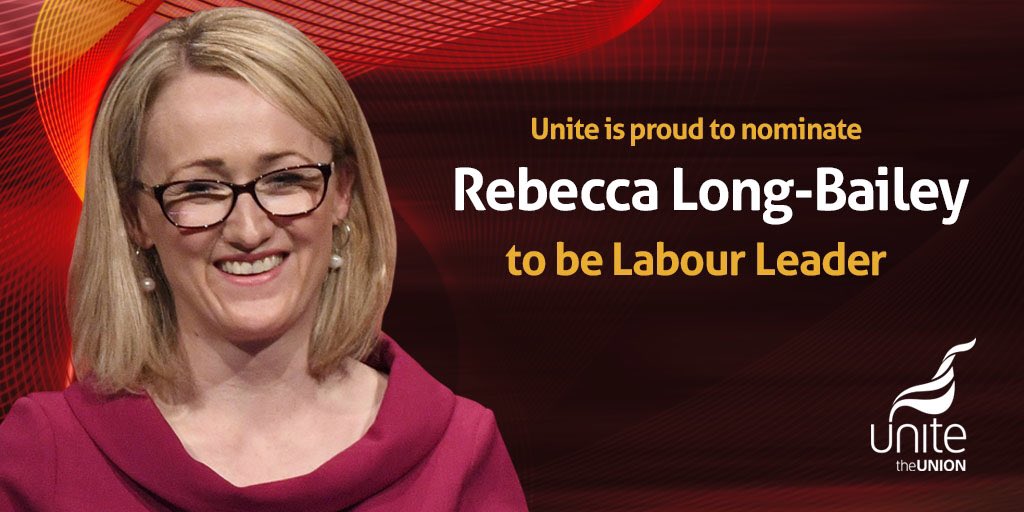