Farage is a real enigma in UK politics.

For a man who has never sat on the hallowed benches of the House of Commons and is not even standing as a candidate for any constituency in the general election, he still manages to command as much media attention as Johnson or Corbyn and all of this power has been driven by his views on the European Union, where he actually is an MEP.

He unveiled what he called, ‘ a Contract with the People’, at the weekend, underlining that this was different from the other party manifestos and as such was of more value.

Although from the outset it was Farage’s euro-scepticism that made his voice heard, forced the Tories to address the schism in their own party, led to UKIP and now the aptly named Brexit Party, in this 21-page document he finally addresses issues relating to business, transport and the environment.

Of course, the driving policy behind this so called ‘contract’, is that there would be a clean-break Brexit and a cap on immigration of 50,000 a year.

However, for the first time there is more detail. The HS2 rail scheme would be scrapped, while £50 billion would be invested in improving current real and road infrastructure and partnerships with internet providers would ensure free basic broadband in deprived areas and on public transport.

The Brexit Party pledge to increase police numbers like the Tories, particularly to tackle knife-crime, drug dealing and gang culture.

Inevitably there is support for the NHS to remain publicly owned and free at the point of entry, but 24 hour GP surgeries looks like a very expensive item on the wish-list.

Much of this ‘contract with the people’, seems it would dovetail easily with Tory policies and indicates a very easy coalition should the need arise after the election.

However, there is one concept that overarches all the rhetoric the Farage may spot in the coming election and that is that he is banking on winning seats.

For a party without any presence in Westminster at all, it will take some shift in the electorate for this new contract to be anything other than a little bit of political history, never to see the light of day. 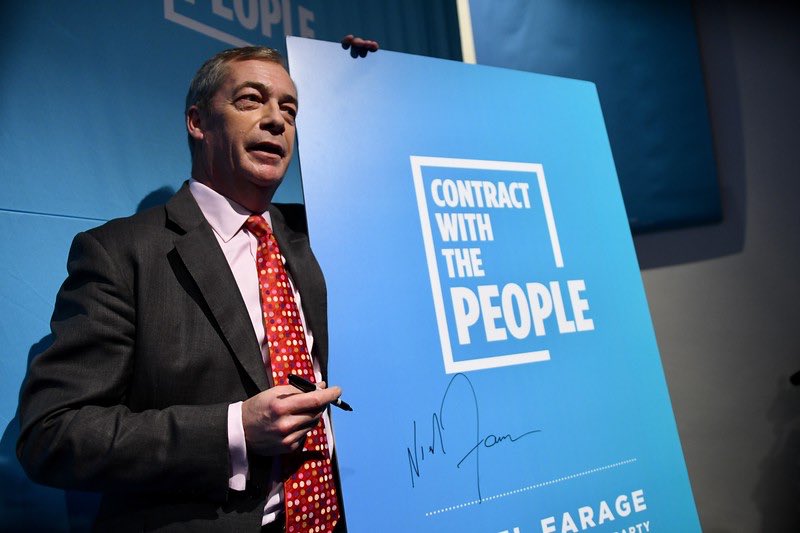 Nigel Farage
Nigel_Farage
Follow
Read our contract with the people:

Most Seats in General Election

Most Seats in General Election