Can a woman win the American presidency?

The nearest that America has ever come to having a female president was last time around when Hillary Clinton went head to head with Donald Trump.

She went into the election as the favourite with both the bookies and the polls and . . .  lost.

Her credentials as First Lady during her husband’s time in the White House were above and beyond any other candidate, and her independent time as a politician also gave her gravitas and relevance.

In comparison, Trump’s CV as a dubious entrepreneur, a Reality TV star, let alone a mysogynist and racist, looked like a recipe for disaster.

However this chaotic, inarticulate man won the votes of the American electorate, and Democrat candidate Bernie Sanders has suggested that the country is simply not yet ready to embrace a woman as Commander-in-Chief.

Sanders lost the Democrat nomination to Hillary and some have seen his comment as churlish but as the Democrat choose their candidate this time, he insists it is not his belief, but something still entrenched in American households.

At a recent Democrat hustings Senator Elizabeth Warren who is vying for the Democrat nomination was initially shocked by her rivals’ conclusion but has now reflected that there are some unfortunate truth in his words.

Warren has a real chance of taking on Joe Biden ( Obama’s vice-president) as the Democrat’s choice, and is taking  every opportunity to highlight why a female candidate can succeed.

Each time she is at a hustings she has pointed out where, and how, women have trumped men in the US political arena, including the fact that Hillary Clinton won the popular vote by 3 million votes.

It seems that the biggest concern for all female politicians is that according to various think tanks people vote for who they think can win, not necessarily who they want to win.

Subsequently, candidates like Elizabeth Warren could be side-lined simply because a man seems more likely to be favoured by the majority, even if that is not true.

Warren is a sharp, well-educated, passionate and articulate woman, who could surely flatten the monosyllabic , twitter addict Trump.

However, it seems that the U.S is about to shoot itself in the foot again and return the 45th president to The White House for a second term. 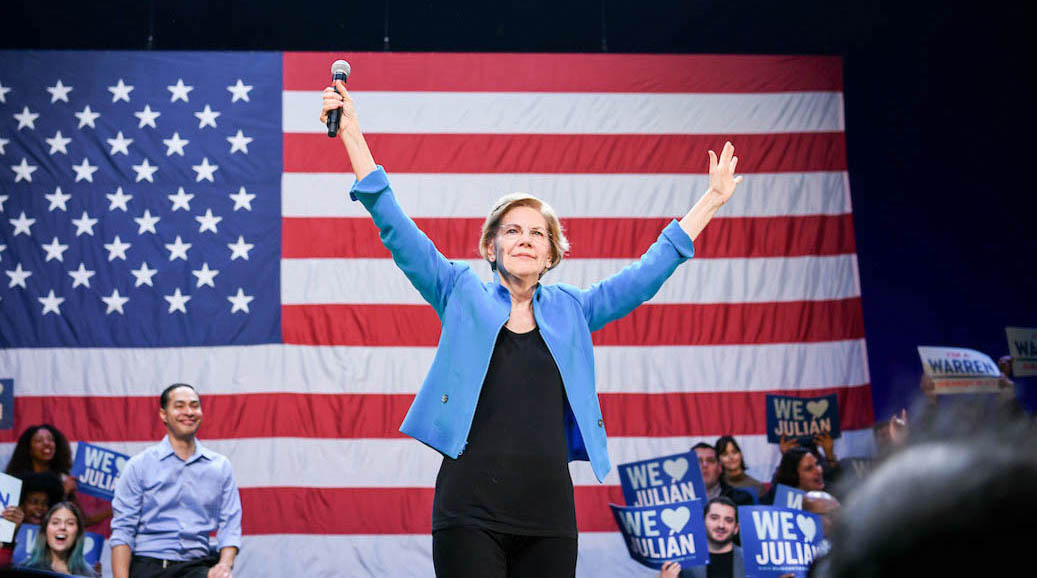 Elizabeth Warren
ewarren
Follow
I just stepped off the #DemDebate stage feeling energized by our fight for big, structural change. And I just heard from my team: We're close to meeting our mid-month fundraising goal. Will you chip in $3 before midnight? https://t.co/QDpcipWnvc
Follow
04:17 AM - 15th Jan 20
1012
6663
Leave a comment
Latest US Articles
Republicans, have insurmountable political incentives to acquit Trump
By Suzi Cairns

Christmas at The White House has come and gone and the 45th US President is only days away from an election year. Few expected that the colourful entrepreneur with the shady past would…

Trump is impeached by the House of Representatives
By Suzi Cairns

Since the Apprentice star rose to the heady state of President of the United States, there have been many attempts to discredit him. This has actually not been a difficult enterprise,…

Even before Donald Trump ascended to his role as President of the United States his character was mired in controversy. Only weeks before the election an outrageous video of him emerged…

The focus of the political media in the UK has unsurprisingly been consumed with the twists and turns of the Brexit story, but across the pond, another mop-headed character is once…

Although here in the UK, headlines are overwhelmed with stories about Brexit, across the pond the political climate is also beginning to hot up as Americans prepare for a presidential…

As Donald Trump revs up for the Presidential Elections in 2020, the man who has been mired in controversy throughout his presidency, appears to be finally in a very tricky place. Time…

Warren, Biden and Sanders face off for first time in Presidential bid
By Suzi Cairns

Although the UK has been obsessed with its own political merry-go-round, with Brexit at its core, the United  States is building up for its next presidential election in 2020.…

During his time at The White House, President Trump has attended many scenes of gun massacres, not least the shootings in Charlottesville which appeared to launch a real public outcry…