You are using an outdated browser. Please upgrade your browser to improve your experience.
This website uses cookies
Cookies help us and our partners provide statistics. By browsing this website, you consent to the use of cookies in accordance with our Cookies Policy.
Accept & Close
Home Articles
Boris Delivers His Demands To Brussels And Gets Dup On Side
10:13
Brexit

Boris delivers his demands to Brussels and gets DUP on side

Yesterday Boris Johnson did what he does best at the Tory Party Conference with a rousing speech focused around the premise, ‘Get Brexit Done’.

With oodles of bonhomie, as usual, even referring to the Commons as a reality TV show, the assembled crowd were seduced by his performance which was peppered with academic reference and enough energy to generate a significant feel good factor.

But what of the substance?

Apart from being resolute that the UK would come out of Europe on 31 October, come what may, he then sent his new Brexit proposals to Brussels for their scrutiny.

He demands in his letter that this treaty should be reviewed every four years by the Northern Irish Assembly at Stormont, even though this assembly is still not sitting at the moment.

There would be a difference between how Northern Ireland and mainland UK would relate to trade, but most importantly it has got the DUP on side.

Arlene Roberts was enthusiastic about the content of this new deal and political commentators have also suggested that some Leave Labour MPs would also jump on board to ratify it.

As ever the numbers are going to be very tight at Westminster with Tory rebels, especially those who had the whip taken away from them, still determined to thwart Johnson’s plan.

However, the most important aspect of the PM’s strategy is that the European Union are prepared to accept his offer and as yet Jean Claude-Juncker and main players like Angela Merkel have made no such noises. 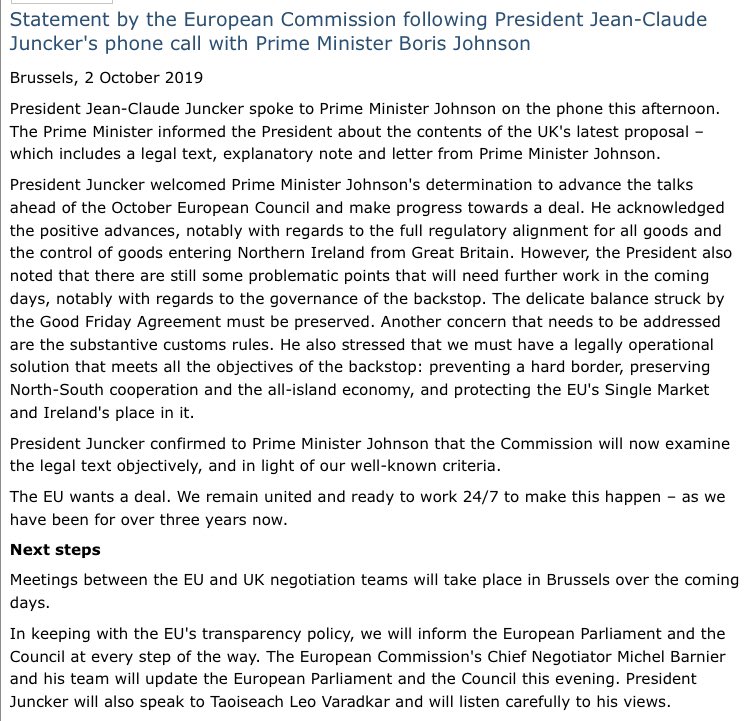 Laura Kuenssberg
bbclaurak
Follow
Statement from Juncker - negotiations will take place in coming days, welcomes some aspects of proposals but says still there are still problems to be worked on - not exactly optimistic but will be relief to Number 10 that they have not been dismissed out of hand https://t.co/HDVobP5mdD
Follow
16:59 PM - 2nd Oct 19
116
200

ITV News Politics
ITVNewsPolitics
Follow
DUP leader Arlene Foster says @BorisJohnson is going to make a ‘sensible and balanced' offer to the EU, but says if they reject it, ‘we will be entering the realms of no deal' https://t.co/fdAgIdqzn9 https://t.co/zYQIP8nOXr
Follow
14:56 PM - 2nd Oct 19
308
746